The Power of the Flare

Squirrel wingsuits just released this amazing video, aimed at illustrating how wingsuits are able to climb in altitude. The concept of wingsuits being able to ascend was disputed by quite a number of skeptics over the past decade, but over the past few years we've seen evidence that not only can a wingsuit flyer gain altitude, but that they can ascend by a few hundred feet. At the time the claims were made, it was probably correct to assume that the wingsuits weren't gaining altitude, but that's only because the performance wasn't there yet.

Wingsuit performance has seen a massive gain over the last decade with new companies like Squirrel getting involved in the market, and for the most part, dominating it. The increase in competitive wingsuit flying has also meant there is a larger drive for performance increases from manufacturers. Despite being one of the newest comers to the wingsuit market, Squirrel have already asserted themselves as one of the leading manufacturers in the industry and whose wingsuits have seen a number world cup wins over the past few years.

In the video, a group of wingsuit flyers and organizers are seen plotting their flights and discussing what the risks involved with the jumps.

The idea behind the video is that they would be using a large canyon in Moab, Utah as a point of scale for their wingsuit ascent attempts. In skydiving, it's generally quite difficult to judge the ascent, if any of a wingsuit flight -- not only because the increase in ascent isn't generally aggressively targeted as a goal, but because there is no static reference to give an indication on the altitude gained.

The video, which provides some seriously awesome cinematography -- also shows us, for the first time, just how much altitude can be gained by these modern wingsuits. In some cases more than 250 feet were gained. The measurements were estimates based off both camera angle and in some cases GPS logs. 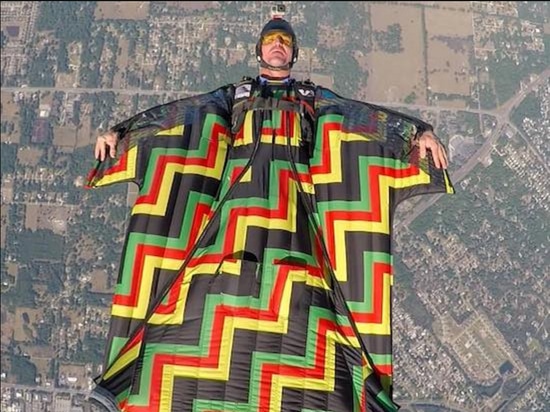