For the love of the sky

When captain Prafulla Raj Singh, a pilot from the city took up para motoring, his motive was to explore a new mode of flying which is his passion. After he was convinced with the sport he underwent training in Pune and was ready to enter an international competition. As a paramotor pilot Singh is of the idea that the sport is the safest mode of flying and with some training from the best people, anyone can do it.

For those who are not aware, Paramotor is a generic name for the propulsive portion of a powered paraglider. The aircraft consists of a frame that combines the motor, propeller, harness (with integrated seat) and cage. It provides two attachment points for the risers of a paraglider wing that allows for powered flight. Pilots who fly these engage in paramotoring which is also known as powered paragliding.

The engines are small, and are favoured for their high output power and light weight. The pilot controls thrust by a hand-held throttle and steers using the paraglider’s brake toggles. This mechanism is similar to that of a sport parachutists. The parachute on the paramotor helps the pilot glide when he chooses to turn off the engine.

In the third FAI Asia-Oceania paramotor championship and 10th World Paramotor Championship Test Competition at Pasak Jolasid Dam, Thailand, he finished second. An elated Singh says it was a surprise for him as he was competing with the best. “It was my first attempt and I went with an open mind and did not expect to make it to the first three,” says Singh.

As part of the competition, the participants had to do a number of tasks and each pilot was judged on the basis of how the tasks were completed. They also had to carry a motor weighing 40 kgs while flying; that can get cumbersome. Adds Singh, “We have to carry it for just a few minutes. Once we are airborne, it is the parachute which carries the weight.” Singh was determined to finish his tasks without worrying about results.

Singh who is also into flying micro aircraft and horse riding adds, “I was very pleased with myself when I realised I had finished second. From India there were many paramotor pilots and as a team, we represented team India.” 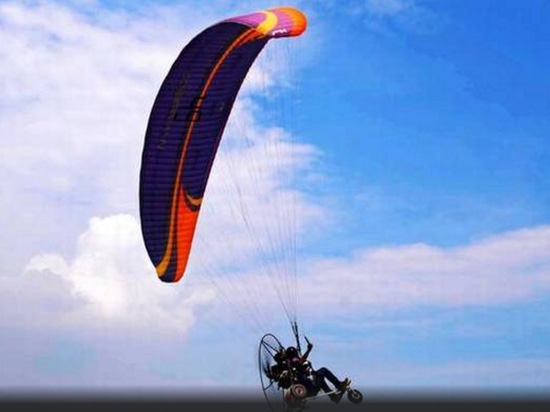