All that's cool and quirky at the Paris Air Show

There are flying cars and Concorde's would-be supersonic successor, a company offering to deliver cargo to the Moon — for a mere $1.2 million per kilogram — and the latest in funky futuristic aviation ideas, both big and small.

No doubt about it: the Paris Air Show is an aerospace geek's paradise.

But with everything from the smallest drones to the largest passenger jets on display, it's tough to sift through it all.

So here's a guide to some of the cool things that caught our eye this week.

Of the various car-type flying machines in development, the two-seat "Pegasus," from French firm Vaylon, can at least boast that it has actually flown.

The carbon-fiber four-wheeler drove out of Paris and then crossed the English Channel between France and England last week, flying from Calais to Dover using the paragliding sail it carries in a niche on its back, and powered by the large fan glued to its rear.

Vaylon's president, Jerome Dauffy, said the car then drove the rest of the way to London's Trafalgar Square.

A Peugeot 400cc motorcycle engine drives the wheels. It and the fan for flying are both gasoline-powered.

Dauffy aims to get the car-plane licensed both for roads and the air, "so you can drive in town and be able to take off anywhere."

As well as to private owners, he hopes to sell the Pegasus to first responders who could use it to fly over disaster-affected areas.

The name of the company developing a supersonic successor to Concorde is wonderfully apt. Boom Supersonic is aiming for an inaugural flight next year of a demonstration plane, the XB-1. Boom's goal is for a supersonic airliner that would fly 2.6 times faster than other commercial aircraft and could half the seven-hour flight between New York and London, flying at 1,450 miles (2,300 kilometers) per hour and carrying 55 passengers.

"Every passenger wants faster flights, every airline is hungry for something different and better to offer to their passengers. And thanks to fifty years of progress and how we build airplanes, aerodynamics, materials and engines, you can build a supersonic airplane which is affordable to fly and profitable to the operator as an airline," Blake Scholl, Boom's CEO, said at the Paris show.

"So it's a second generation of supersonic airplane. We're picking up where the Concorde left off and building something that is much more efficient, way more affordable to fly, also even faster."

The graceful Concorde cruised at 1,350 miles (2,160 kilometers) per hour and is still much lamented by enthusiasts following its retirement in 2003.

Several companies at the Paris show are offering solutions to bring down drones, responding to concerns that the unnamed flying machines could be modified to carry toxic agents and used by terrorists to attack crowds from the air.

France deployed anti-drone technologies to protect stadiums when it hosted the European soccer championship last year. Drone tracking and jamming equipment has also been used to safeguard the airspace above championship football games in the United States and military bases — both from attack drones and those used for surveillance and intelligence-gathering.

Black Sage, based in Boise, Idaho, showcased a Christmas tree-like array of sensors at the Paris show that the company's co-founder, David Romero, said can spot and track drones as small as four inches (10 centimeters) across — no larger than many birds.

Their equipment can then disorientate unwanted drones by zapping them with radio beams — either bringing them down or sending them scurrying away, back to where they first took off. Romero said their system was deployed to safeguard the airspace above the British royal family at a ceremony last November.

"The threat is people that want to cause harm and they have got a lot of tools to be able to do that," Romero said. "We now have to have security in three dimensions."

Hungarian innovator ByeGravity is aiming to develop a supersized drone-bike that a pilot could ride like a motorcycle.

ByeGravity CEO Balazs Kerulo is a keen motorcyclist, with his sights set on the skies. Having already flown a basic test version of the "Flike," Kerulo came to the Paris show looking for more funding to develop a product version of the futuristic, electrically powered tri-copter.

"It should be ready within two or three years as a product," he said. For now, it can fly for about 20 minutes, at a top speed of 60 kilometers (37 miles) per hour, "but we are expecting major improvements, just like everyone else, in battery technologies."

"I think that the technology is ready," he said. "It's evolving, it's booming, we have better and better battery technologies. We have all means of a computer-controlled drone technology that is needed for this ... I still believe that even me or you will be flying these kinds of things within ten or maybe 15 years." 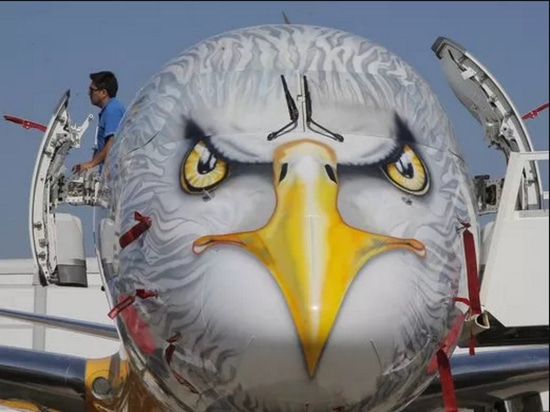