Significantly brighter green LEDs for use in displays have been developed in the UK by Plessey Semiconductors.

These materials convert short wavelength blue light, of around 450nm, to red or green wavelengths, but with a typical efficiency of between 10 to 30 per cent.

Now MicroLED technology developer Plessey Semiconductors, based in Plymouth, Devon, which builds displays for devices such as augmented reality (AR) and virtual reality (VR) systems, has produced LEDs that emit green light without the use of these colour conversion materials.

The green LEDs are produced by growing gallium nitride on silicon, in a similar way to the process used for blue LEDs, according to Dr Keith Strickland, chief technology officer of Plessey Semiconductors.

“This system allows the deposition of highly ordered crystalline layers at the atomic level, through chemical reactions in the deposition chamber,” he said.

In this way the company deposits atomic layers of material onto silicon substrate wafers.

“And through selective and precise controlled layering of the materials, in our case gallium nitride, and incorporating different levels of doping with other materials, such as indium, we can build up an LED device with particular properties,” he said.

By varying the amount of indium that is incorporated into the quantum well structures of the LED, the devices can be made to emit green light.

Without the efficiency losses inherent in the use of colour conversion materials, the green light emitted is much brighter than that from converted blue LEDs.

With a wavelength of 530nm, the Green is well suited for colour displays, the company said. 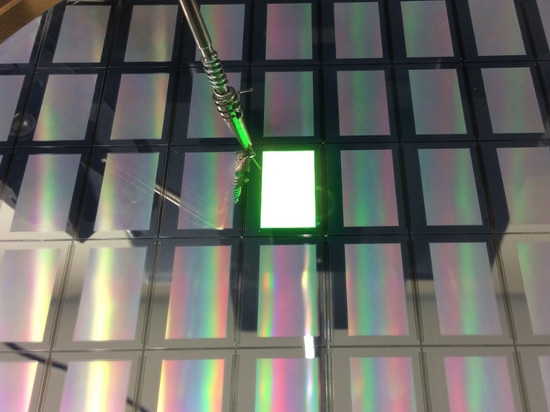