The longest continuously produced plane in history shows no sign of fading away.

Overview: Back in the early 1950s, when the Lockheed C-130 Hercules (now the Lockheed Martin C-130J Super Hercules) was created, it was unlikely that anyone knew what a huge impact on aviation history this transport/jack-of-all-trades would have on aviation. Surely no one would have suspected that the new plane, a replacement for 10-year-old designs from World War II, would last more than 60 years throughout the jet age and still be going strong. But it is.

Background: The impetus for the development of a new cargo/troop transport plane was the need for one that wasn’t as limited as the existing models at the time. Those included the Curtiss C-46 Commando, the Fairchild C-119 Flying Boxcar and the Douglas C-47 (DC-3) Dakota/Skytrain. The Air Force’s new transport was to have more of everything: longer range, greater speed, increased lifting power and expanded troop capacity.

In order to do that, piston engines would need to be abandoned for a recent invention, the turboprop, which had been toyed with during World War II (and even before), but it wasn’t until after the war that it became clear that propellers still had a future and piston engines were a technology of the past.

There were 10 designs submitted for the competition, and Lockheed won with a design that was designated at the time for the Model 82 and, after it had entered the test flight phase, YC-130.

Its new-design powerplants were what made the C-130 possible. That first Hercules, universally known as the Herk, was powered by four Allison T56-A-9 turboprop engines, which were developed specifically for the C-130. This was no surprise. The design criteria wouldn’t have been possible with existing piston powerplants, and turbojet engines were still too fuel inefficient to hit the new transport’s range goal. With turboprop power, the Herk could carry around 70 troops, be able to fly with one of the four engines shut down, would have a rear hatch for accommodating large loads, including armored vehicles, and would be able to operate from rough strips.

Legacy: The first Herk was handed over to the Air Force in December 1956. Since then, Lockheed (now Lockheed Martin) has built more than 2,500 C-130s in 40 different flavors, including an early one on skis.

In addition to transporting troops and gear, Herks have served as military gunships, search-and-rescue platforms, Hurricane Hunters, aerial firefighters, aerial refuelers and environmental response tankers. There’s very little the Herk can’t be called upon to do.Today, the C-130 stands as the oldest continuously produced military plane, with more than 60 years of factory-new Herks rolling out the doors. Everything on the plane has been updated, from engines to avionics. But it’s still the Herk. Will it ever be replaced? They’ve tried for years to do that, including with the C-17 Globemaster III, which instead replaced the C-141 Starlifter. There are plans for a new plane to start flying around 2030 in place of the C-130. The smart money is, by then, for the Herk to be just as hard to replace as ever. 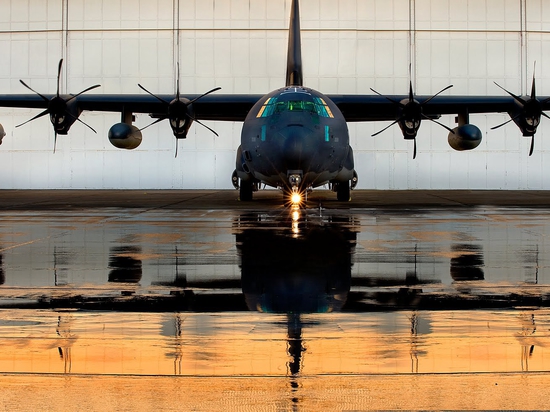