Drones could be key to connecting large numbers of devices scattered in the environment to create IoT networks.

This is the view of researchers at KAUST (King Abdullah University of Science and Technology, Saudi Arabia) who have demonstrated that drones, or unmanned aerial vehicles (UAVs), can fly efficiently between clusters of IoT objects to collect data.

“IoT networks will revolutionise the way we monitor, control and communicate with everything around us,” said Osama Bushnaq, a Ph.D. student in Tareq Al Naffouri’s lab. Crop fields could be filled with sensors that monitor water and nutrient levels. The research is detailed in IEEE Transactions on Wireless Communications.

“To enable IoT networks, a huge number of low-cost, self-powered sensors are needed,” Bushnaq said in a statement. Traditional wireless data transfer is unsuitable for this purpose due to the limited power supply of each sensor and the complexity of connecting so many devices.

Sending UAVs to gather data via low-power, short-range transmission could be an alternative, transferring data aggregation from each individual sensor to a single machine that can autonomously return to base for recharging. According to KAUST, the challenge comes in calculating the most efficient approach to data collection in order to minimise mission time and maximise productivity.

Imagine a field randomly covered with IoT sensors, Bushnaq said. “Covering a small area of the field at each hovering location improves communication between the UAV and the devices, reducing data aggregation time,” he said. However, the UAV needs to spend more time traveling between all the IoT devices in the field. Minimising the total mission time involves optimising UAV coverage area, the number and location of hovering locations, and the UAV’s path between each location.

The team is said to have split the problem into components. For a given number of hovering locations, they first calculated where the optimal hovering locations would be. They then applied the so-called ‘Traveling Salesman’ problem to identify the best route between locations and optimised the data transmission rate.

“The process is repeated for different numbers of hovering locations until an optimal trade-off between hovering and traveling times is obtained,” Bushnaq said. The approach cut the mission time by up to 10 times for a field of 100m2.

The team is currently testing the idea of using UAVs with IoT sensors for fire detection. “We are studying how such a system can be used for forest fire detection and the trade-off between system cost and fire detection reliability,” Al Naffouri said. 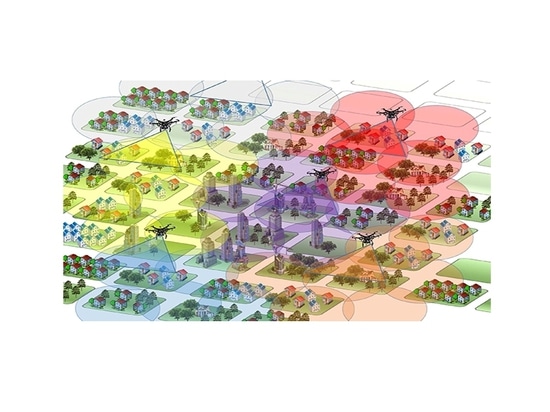