Chinese airframer Comac is pushing ahead with efforts to maintain its C919 and ARJ21 test flight programs as public health officials continue to grapple with the coronavirus outbreak.

According to a company statement, the sixth C919 prototype jet flew from its Shanghai production facility on February 23 and remained airborne for an hour and 59 minutes before landing at Dongying Shengli Airport in Shandong Province. Coded 106, the aircraft will undergo cabin, lightning system, and exterior noise testing at Dongying and other test flight bases, the airframer said on Monday. Meanwhile, prototypes 101 to 105 continue to undergo intensive flight, static, and other ground verification tests in Dongying, in Shaanxi province, and Nanchang, in Jiangxi province.

Comac’s domestically developed regional jet, the ARJ21-700, also took to the skies for more testing this past weekend under tightly controlled measures to stem transmission of the virus among various work teams. Aircraft 131 performed a three-hour, 39-minute maiden production test flight from Shanghai Dachang Air Base while aircraft 103 completed a one hour and 43-minute flight test evaluation of its stall warning system from Shanghai Pudong International Airport.

Comac officials acknowledged last week that its flight test missions had become increasingly challenging under the shadow of the coronavirus, which now is taking a toll on the global economy. With many workers unable to reach facilities and offices and supply chains disrupted, China’s Ministry of Industry and Information Technology has begun supporting coordination among teams working under quarantine, while test facilities have implemented strict control measures to protect those involved in aircraft production and flight testing. To compensate for a decrease in employee numbers, ARJ21 test pilots have begun undergoing training for C919 test pilot qualifications and Comac has launched a 12-day simulator program to accelerate flight training.

While Chinese businesses have been slow to restart, the Civil Aviation Administration of China (CAAC) hopes to resume a number of key civil aviation projects nationwide. Since February 20, at least 11 out of 81 airport construction projects have restarted, while civil aviation engineering bidding work continues to proceed as normal, the CAAC said. Chinese authorities have also adjusted the administrative approval process using online submissions of materials and meetings to accelerate the preliminary work of various aviation projects.

Meanwhile, Chinese airlines such as China Southern, Shenzhen Airlines, Air China, and China Eastern are moving to restore some suspended flights in an effort to boost the local economy. Airlines have also arranged for charter flights to transport teams back to workplaces in various parts of the country. 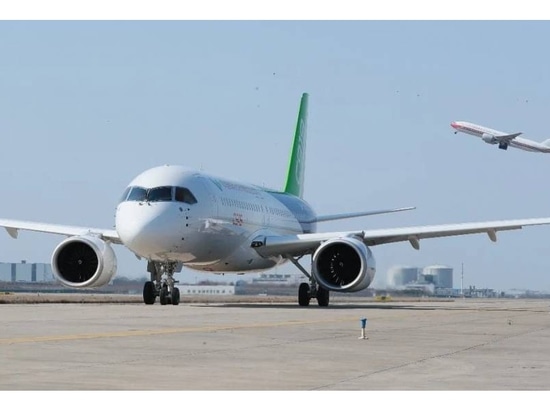 The sixth C919 test article prepares to fly in Shanghai.