Britain’s Royal Navy is pushing to have two vital rotary-wing programs ready for when its first Carrier Strike Group (CSG21) sets sail for the Far East in 2021.

Both the Crowsnest helicopter-borne early warning system and the arming of the naval version of the Leonardo AW159 Wildcat are vital components in the protection of the UK’s new aircraft carriers, HMS Queen Elizabeth and HMS Prince of Wales.

. Wildcat To Get MBDA’s Sea Venom and Thales’ Sea Martlet

But both programs have fallen behind schedule. Crowsnest, which fits Thales’ Searchwater 2000 radar onto the navy’s Leonardo EH/AW101 Merlin Mk. 2 anti-submarine warfare helicopters as a roll-on/roll-off kit, was due to be ready by year-end. But it has emerged in procurement reports that the program will now only “deliver an incremental capability” to support CSG21. Also, plans to fit both MBDA’s Sea Venom anti-ship missile and the Thales Light Multirole Missile (the Sea Martlet) onto the Wildcat have been affected by issues with the weapons and their integration onto the helicopter.

Crowsnest, led by prime contractor Lockheed Martin, has been challenged by “three different integration problems in one,” senior Royal Navy officers told a conference in London in February.

“We were taking a system that had some original parts; others needed a firmware upgrade; and some have needed replacing entirely because of obsolescence,” one officer said. “It has been a tough ride, but by CSG21 [deployment] we will have these platforms out and doing what they are supposed to be doing in terms of surveillance and control.”

Lockheed Martin was selected as the prime for the program because it performed the upgrade of the Royal Navy’s Merlins to HM2 standard and was selected to integrate the radar onto the helicopter.

Leonardo Helicopters is modifying all 30 of the Merlin HM2s in Royal Navy service to be ready to carry the Crowsnest system and is performing the flight testing. The UK Defense Ministry is buying 10 Crowsnest kits.

During the CSG21 deployment the Merlins will be primarily based on the aircraft carrier, but the Wildcats will operate from the decks of escorting frigates and air defense destroyers.

The carrier’s Merlins will include aircraft configured for airborne early warning and others for the anti-submarine warfare (ASW) mission.

To put the weapons onto the Wildcat, Leonardo has developed the Wildcat Weapons Wing. Its aerodynamic profile is able to offset the weight of the weapons while in cruise, with each wing delivering 360 kg (795 lb.) of extra lift. The wings are constructed of aluminum and carbon-fiber composites, and each features two pylons. Once fitted on the aircraft, the Wildcat can carry up to four Sea Venoms, each weighing around 110 kg, or four weapons carriers capable of carrying up to five podded Sea Martlets each, for a total of 20 missiles.

According to the government’s own defense procurement reports, planned initial operational capability for the Sea Venom is now 2022, while the introduction of the Sea Martlet is planned for the beginning of January 2021.

The Wildcat’s role in the Royal Navy is primarily anti-surface warfare rather than the ASW mission normally performed by the Merlin HM2.

Putting 20 Martlet missiles onboard is a result of “weapon effort planning and design,” says Louis Wilson-Chalon, maritime marketing manager at Leonardo Helicopters, speaking in Liverpool, England, at an exhibition aboard HMS Prince of Wales. The system is designed to deal with a swarm attack from fast-attack craft: “If you have 30 of them trying to attack your task force, you don’t need to destroy them all; 20 should be enough,” he says.

A similar mission with the Lynx helicopter that the Wildcat replaced would have resulted in a higher workload for crews and required more helicopters.

Wilson-Chalon says a mission to attack a small warship such as a corvette previously would have required at least two helicopters, but a single Wildcat with four missiles targeted to come in from different directions can overwhelm the close-in weapons system ships use to defend against such missiles. Leonardo has already flown captive carriage trials with weapons fitted to the wing. No firings have taken place yet, but these will likely occur later this year.

Meanwhile, Leonardo is also gearing up to demonstrate a manned--unmanned teaming capability from a British Army-operated Wildcat in support of the UK’s Defense and Security Accelerator technology program.

The flight trial will see the helicopter’s mission commander, in the left-hand seat, take control of an unmanned aircraft system and prove a Level of Interoperability of 4, allowing the crew to control and monitor the UAV and its payload, but not perform launch and recovery. The trials are focused on studying crew workload during the UAV’s operation. 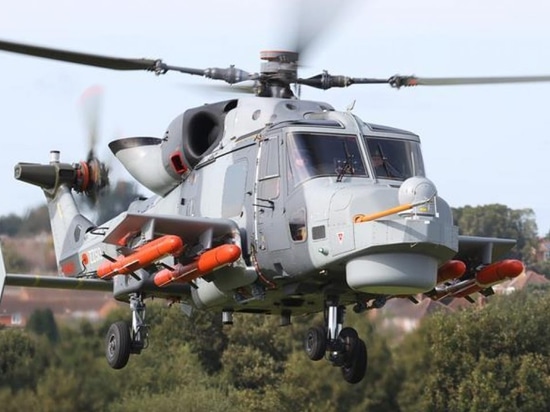 The Wildcat Weapons Wing offsets the weight of the weapons in cruise flight, giving the helicopter an impressive loadout.