SR-71 and U-2 Featured in Air Force Museum Events

In a celebration of the SR-71 and U-2 aircraft, the National Museum of the United States Air Force in Dayton, Ohio, will be hosting an event titled “Secrets Revealed”, in which more than 20 former pilots and crew members will participate in panel discussions, narrate live presentations, and meet visitors in the museum.

Col. (Ret.) Merryl Tengesdal, the first and only female African American U-2 pilot, who has flown more than 300 combat hours from Afghanistan to the Horn of Africa, who will meet visitors and answer questions about the U-2 on March 7 from 10-11:30am and from 2-3:30pm.

Unique artifacts on display both days include a full pressure suit worn by SR-71 pilots, actual cockpit equipment from the SR-71, and unit memorabilia from the 1st Reconnaissance Squadron, as well as various flight manuals and historical photos.

The two-day event supplements the museum’s new-for-2020 “First Thursday” events, in which various cockpits are opened up to visitors from 5-8pm on the first Thursday of each month.

On the first Thursday of January, visitors were able to look inside the museum’s CV-22 Osprey, and in February, they were afforded the rare opportunity to climb into the Rockwell B-1B Lancer and view the cockpit. This Thursday, the F-100F Super Sabre will be opened up for viewing, followed by the AC-130 Spectre gunship in April. 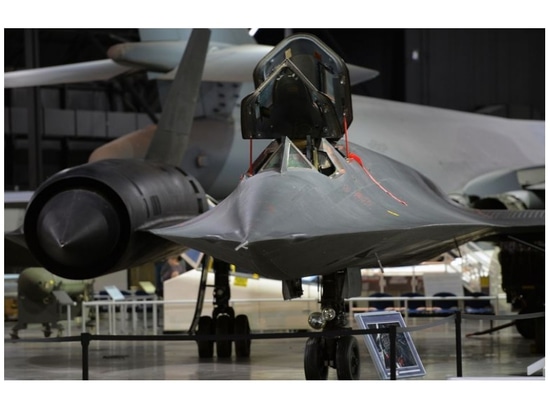 The SR-71 Blackbird commands attention at the National Museum of the United States Air Force.