Pursuing the goal of flying fun while staying virtual.

The power—the finesse—the heart-stopping action—the extreme talent possessed by a select few pilots that inspire and entertain us when they fly—that’s what air shows mean to us at Flying. We can’t miss a moment—and neither should you. And that’s why we’re excited about the first Socially Distant Airshow, brought together by a host of air show veterans and produced by the folks at LiveAirShowTV. It’s coming to a screen near you on April 21 to 23, next week, beginning at 3 pm EDT.

“The concept was initially developed by Matt Jolley, Ric Peterson and Rob Reider of “Show Center–The Airshow Podcast,” said Jeff Lee, president of LiveAirShowTV. “LiveAirShowTV has worked with them many times over the years. They contacted us to see if we were interested, and of course we jumped at the chance.” As for the name? It’s hard to say who actually came up with the homage to social distancing, but Lee gives credit to Peterson.

The producers will be streaming this live on Facebook and YouTube. “The actual air show acts are obviously recorded, but Ric, Rob and Matt will be live,” said Lee. “Stephanie Stricklen will jump in from time to time with social media input.”

So, what should you look for that’s special about the Socially Distant Airshow—beyond great acts by some of your favorite performers? “The main point of interest today is the amount of support we are getting from around the world,” said Lee. “We have submissions from Italy, Brazil, Canada, the United Kingdom, Belgium, and France. Finally, remember that while this is free to watch, we are asking for donations to the ICAS Foundation to help those affected the most in our industry by the cancellation of shows.” 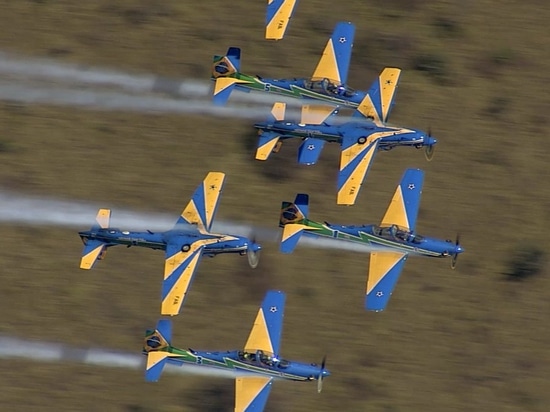 Great airshow performers from around the world, such as the The Esquadrilha da Fumaça fumaceiros (Brazil) join the Socially Distant Airshow.