The National Aviation Hall of Fame mourns her death at age 104.

Zoe Dell Lantis grabbed the opportunity to work as an exhibition girl at the Golden Gate International Exposition in San Francisco in 1939—which celebrated the opening of the Golden Gate Bridge just six months prior. Lantis was a 20-year-old dancer looking to expand her horizons, and she did just that, joining an aerial promotional tour that would cross the country demonstrating the wonders—and safety and reliability—of commercial air travel. Specifically, Lantis delivered invitations to San Francisco’s “world fair” in United Airlines’ shiny new Douglas DC-3s.

Zoe Dell dressed as a “radiator cap girl” back then, but her love for aviation was true—she ended up learning to fly and devoting her life in service of aviation and other philanthropic causes. Zoe Dell married Ervin J. Nutter in 1965, and for decades the two supported the industry—and they are credited as founding members of the National Aviation Hall of Fame in Dayton, Ohio.

Zoe Dell passed away peacefully at home on April 22, 2020, at the age of 104. She was preceded in death by Erv, who died in 2000. The pair donated millions to aviation causes over the course of their lives, including the Ervin J. Nutter Center at Wright State University in Dayton in 1986.

Zoe Dell earned her commercial pilot certificate with multiengine and instrument ratings, and she went to work for Piper Aircraft in the early 1960s as a spokesperson. Later, she flew as a demo pilot for Piper dealer Monarch Aviation in Monterey, California. Erv Nutter owned Elano Corporation, an aerospace engineering firm and supplier founded in 1950 in Ohio—and the two met while she was on a business trip in Dayton. Zoe Dell became president of Elano's small aircraft division and a company pilot. In 1986, General Electric purchased Elano to support its aircraft engine division. The company merged with Unison Industries in 2004. In 2008, Zoe Dell was honored as a Living Legend of Aviation.

“The National Aviation Hall of Fame has lost its greatest friend today,” said president and CEO of the NAHF, Amy Spowart. “Everyone who knew Zoe Dell had a story about her. She was larger than life and for those in the areas blessed to be her passions, she offered the full energy of her life in service to her community and the organizations she loved. Zoe Dell was a pioneer, a maverick, and an innovator. Her impact on the world will not be forgotten.” Formed by an act of Congress in 1964, the NAHF honors aviation pioneers from the United States. Its Heritage Hall and Education Center provides opportunities for future generations to understand the contributions that a deep legacy of individuals have made throughout our aerospace history. 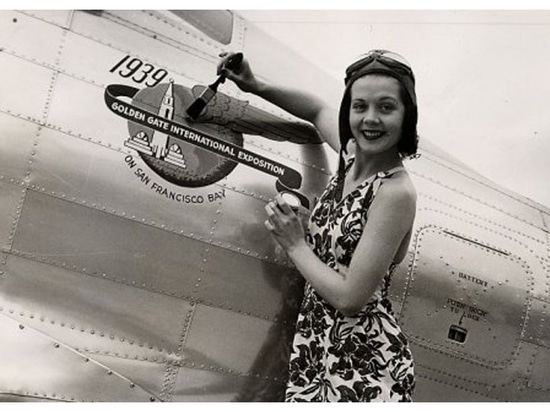 Zoe Dell Lantis Nutter traveled across the US in the late 1930s promoting commercial aviation on United’s DC-3s.