Airbus Helicopters has handed over the first two H145s to the Fuerza Aérea Ecuatoriana (FAE, Ecuadorian air force). The service has six on order, the remainder to be delivered over the coming year, and the contract includes the training of 12 pilots and 15 technicians to fly and support the helicopters.

The handover took place on October 27, a significant date for the FAE as it is the 100th anniversary of formal military aviation in the country. A military flying school was established with Italian assistance on that date in 1920, although it was not until the early 1930s that a flying branch—the Fuerza Aérea Ejército Ecuatoriano—was formally created within the army. The FAE adopted its current name when it became an independent service in 1947.

The FAE finalized the order for the H145s in November 2019, ending a search for a helicopter with excellent hot-and-high performance to replace the HAL Dhruv. Ecuador took delivery of seven of the Indian utility helicopters between 2009 and 2012, but by 2015 four had been lost in crashes. The FAE decided to ground the remaining three and put them up for sale, while all contracts with HAL were canceled. HAL defended the Dhruv and stated that two of the losses occurred for mechanical reasons after the company’s maintenance support contract had ended.

In service, the H145s will fly with Escuadrón de Combate 2211 “Cobras,” which operates from Base Aérea Simón Bólivar, located on one side of Guayaquil International Airport. The H145s will adopt the name Cobra. The squadron previously flew the Dhruvs and currently flies a few light aircraft on utility duties.

Border security and anti-drug trafficking operations are the main military missions for the H145, as well as providing high-altitude rescue cover in the mountainous regions of the country, medical evacuation, and disaster relief capability. They are equipped with a cargo hook, rescue hoist, searchlight and electro-optical sensors, and carry stretchers internally.

"We are very happy to have new advanced technology equipment to help face our country’s operational challenges, where high-performance helicopters are needed to fly in the Andes at up to 6,000 meters [20,000 feet], in the jungle, or on the coast,” said Colonel Franck Cevallos, commander of the FAE’s Ala de Combate 22, which parents the Cobras squadron.

Colonel Chiriboga, head of air operations for the FAE, added that: "Thanks to the installed mission equipment, it will be possible to move quickly from a rescue to a transport mission, reinforcing the Air Force’s response capacity for disaster relief and other missions in support of the public." 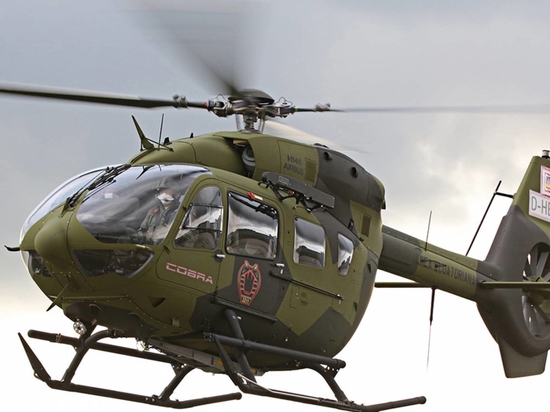 Wearing temporary German civilian registrations, one of the first two Ecuadorian H145s undergoes a pre-delivery test at the Airbus Helicopters factory at Donauwörth.