Lufthansa Technik’s (LHT’s) in-development "nicechat," which can control cabin entertainment and environmental systems via voice command, is coming to market next year aboard an unnamed aircraft manufacturer’s new business jets.

“Initially, it will be on one model,” said Andrew Muirhead, LHT’s original equipment innovation product division head. “I wouldn’t be surprised if it became available on others.”

Nicechat will be integrated with LHT’s signature “nice” cabin management system (CMS) already on the manufacturer’s jets, but Muirhead declined to say if it would be standard or optional equipment, as LHT does “not want to preempt any announcement” from the OEM. But the voice command system is readily adaptable to other CMSs and to aftermarket retrofits, and LHT plans to make it available for those applications as well.

“There’s quite a lot of interest in this technology—it’s not specifically tied to one solution,” he said. “I think it could pretty much go on any aircraft.”

Nicechat will handle commands that typically require passengers to make menu-driven choices on display screens, such as entertainment modes and content, and customized lighting and temperature preferences.

“We’re not talking about simple things like lights on, lights off,” said Muirhead. “We’re focusing on things that take a little more effort.” He also said the voice system would be capable of learning.

Voice command is one component of LHT’s plan to digitize and personalize onboard experiences—a goal enabled by its in-development fifth-generation nice CMS, which will support technologies like OLED ceiling panel displays and onboard sensors.

“The idea is that anyone interacting with the cabin management system can make it the way they want it,” Muirhead said. “Voice control is just one part of the fifth-generation system.”

Last October, at NBAA-BACE in Las Vegas, LHT showcased these emerging capabilities on a mockup of a nine-foot section of a cabin featuring nicechat and an OLED ceiling panel that responded to spoken commands, shifting among a variety of different decors and appearances—a stucco ceiling, a mural, or a skylight looking into the heavens, for example.

At the time, LHT was already working with the launch customer on developing customized voice commands for its nice CMS installations. The command library is “stored locally on the aircraft,” Muirhead said, so it doesn’t require onboard connectivity. Also, the system activates with a button rather than voice to ensure it can’t listen to conversations by unintentional activation—an “important criteria” for passengers on business and VIP aircraft, according to LHT.

Meanwhile, display panels could be embedded in a variety of surfaces. “We’re looking at creating a cabin environment by integrating OLED to create a digital ambiance in the aircraft,” Muirhead said. “It’s dynamic configuration of the cabin based on the context of personal preferences, and where the aircraft is at a particular time and place in the journey—for watching movies, for working—it’s like a canvas.”

Bolstering the efforts, LHT’s AerQ joint venture launched last year with LG Electronics, which aims to bring display technologies like OLED to the commercial airliner market, will carry spinoff benefits for business aviation, according to Muirhead.

The coming nice update will also accommodate sensors that collect information to assist in customizing the experience, in-cabin maintenance, and for a new focus: health and hygienics.

“We have a big R&D emphasis on sensors and air filtration and water filtration,” said Muirhead. “We just launched a new product for water filtration that’s much higher performance in terms of reducing bacteria in the water.” Once public aviation gatherings recommence, he said, “We’re going to make a big song and dance about it at a trade show.” 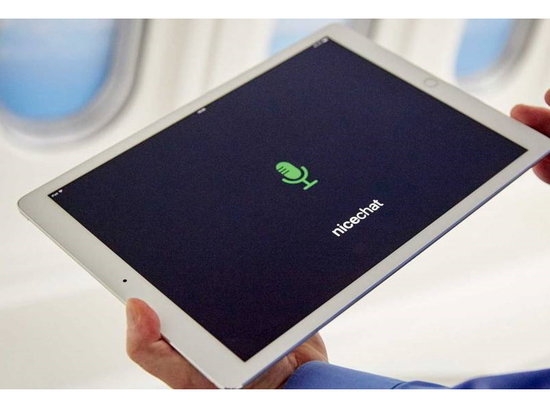