Thorne's comments come in the third month of Gogo's first year as an all-business aviation company, after the sale of its commercial aviation business to Intelsat was completed in December 2020. Gogo's 5G network will become accessible to business aviation operators in North America as a single channel, combining their existing network's 4 megahertz of licensed spectrum with 60 megahertz of 2.4 unlicensed spectrum.

The company's new 5G network will leverage the existing 250 towers that enable its current 3G and 4G IFC network service on business jets today. The 5G network will use an unlicensed spectrum in the 2.4 GHz band, with a new modem and beamforming technology providing the airplane-to-ground station link.

"We're extremely pleased with the progress our team and our partners Cisco, Airspan, and FIRST RF have made on this project. However, as is true of many projects in the telecom and satellite space our schedule has slipped, primarily because of a supply chain delay for one particular microchip. And we now expect to deploy the network in 2022 instead of 2021," Thorne said.

Thorne also provided more details on how 5G will be enabled onboard business jets that are equipped with their AVANCE platform. AVANCE, enabled by a modem, and antennas, integrates a range of smart cabin features, and includes a built-in smart router that operators can manipulate for cockpit data as well as in-flight texting or calling.

"I don't think we've done justice to how AVANCE is truly a software-centric platform," Thorne said, referring to how Gogo has marked AVANCE in recent years. "So, what do we mean by software-centric? We mean that like Apple, where iOS is the operating system for all of their devices, AVANCE is our operating system and all of our devices whether L3 or L5 on the plane, our applications in the ground, on the ground - in the cloud on the ground, they all run on the same software."

When 5G becomes available, business jet users could also use AVANCE to access multiple networks through one central in-flight portal.

"As I mentioned with 5G, it can aggregate multiple bearers or multiple networks into one channel, or SSID [Service Set IDentifier], if one wants to expand capacity for certain users on the airplane. It's engineered to be extensible, easily supporting the addition of new products and features, which soon we'll be able to load over the air," Thorne said.

Selling their commercial aviation division to Intelsat has also already proven to have come at a great time for Gogo as well. Gogo entered 2020 with 5,669 subscribers to its North American IFC network and finished the year increasing that number to 5,778.

Among business jets equipped with Gogo in North American airspace, flight activity for both charter and fractional operators was up through the end of February. Corporate flight departments also completed 75 percent of their February 2020 flight counts, according to Thorne.

Overall average Gogo data consumption per flight through the first two months of the year was also 20 percent above the average consumption that occurred during the same period a year ago.

"Though the business aviation market is relatively small compared to other mobility verticals, it holds a lot of opportunity for a niche-focused company like Gogo. 66 percent of the world's business aircraft are registered in North America," Thorne said. "And more than 70 percent of those roughly 18,000 aircraft do not yet have broadband in-flight connectivity. For the last five years, Gogo has added an average net of 400 aircraft online per year and we feel we can sustain that pace or a little better over our five-year planning horizon." 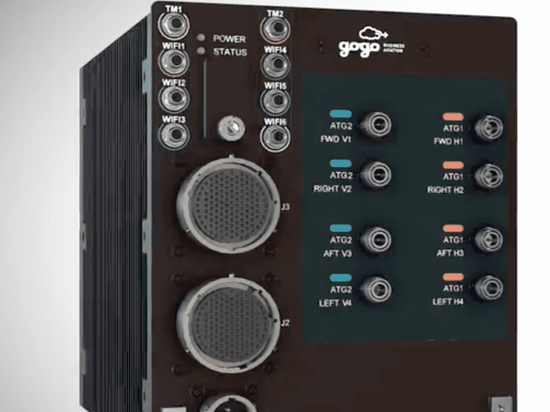