Seoul (CNN)South Korea unveiled its homegrown supersonic jet fighter on Friday, joining an exclusive club of military aviation giants and setting the stage for a $5.2 billion program it hopes will be a top export driver and jobs creator.

Once operational, the KF-21 jet is expected to be armed with a range of air-to-air and air-to-surface missiles -- and possibly even air-launched cruise missiles.

The twin-engine fighters will come in single- and two-seat versions, depending on the missions to which they are tasked.

"A new era of independent defense has begun, and it's a historic milestone in the development of the [South Korean] aviation industry," President Moon Jae-in said at the rollout of the KF-21, nicknamed Boramae, or "young hawk trained for hunting," at the production plant of Korea Aerospace Industries in Sacheon, South Gyeongsang province.

"When full-scale mass production begins, 100,000 additional jobs will be created and we'll have an added value of 5.9 trillion Korean won ($5.2 billion). The effect will be much greater if they're exported," Moon said.

South Korea is expected to produce six KF-21 prototypes for testing and development, the first three to be completed by the end of this year and the next three in the first half of 2022, according to the country's Defense Acquisition Program Administration (DAPA).

While only 65% of the KF-21 is of South Korean origin, its rollout still marks a significant achievement for a country that doesn't have a lengthy history of aircraft production.

"When the final tests are completed in the future, South Korea will become the eighth country in the world that has developed an advanced supersonic fighter," a government statement said.

Those countries are the United States, Russia, China, Japan, France, Sweden and a European consortium of the United Kingdom, Germany, Italy and Spain.

Of those, only the United States and China have deployed domestic-made fifth-generation fighter jets -- planes which feature stealth technologies, radar-jamming capabilities and advanced avionics that integrate onboard and remote data to give pilots a complete real-time picture of their operation, according to NATO's Joint Air Power Competence Center.

While the DAPA calls the KF-21 a 4.5-generation fighter jet because it lacks, for instance, an internal weapons bay that increases stealthiness, analysts say it may be able to fly higher and faster than the newest US-made fifth-generation fighter, the F-35, and still carry a robust weapons load.

"The KF-21 is the first fighter aircraft made with domestic technology, and it indicates that South Korea is now able to build fighter aircraft by its own. It will also be a stepping stone to develop better fighter aircraft and operate locally developed arms," a DAPA statement to CNN said.

The KF-21 is a joint project between South Korea and Indonesia in which Seoul holds 80% of shares while Jakarta seeks 20%. South Korea says Indonesia is behind in payments to the project, but negotiations continue and Jakarta's defense minister was at Friday's rollout.

Moon saluted Indonesia for its role. "In particular, I thank the Indonesian government for becoming a partner who believed in the potential of South Korea," he said.

While the KF-21 might eventually replace hundreds of fighter jets in South Korea's fleet, it also has significant export potential because its price tag is expected to be significantly lower than the F-35s the US sells to foreign militaries.

Thailand, the Philippines, and possibly even Iraq "could be leading clients for the fighter," Ait wrote, noting those countries all operate the same kind of aircraft the KF-21 will replace in South Korea's fleet. They also have been customers for South Korea's indigenously developed FA-50 light-attack fighter.

If Seoul is successful in marketing the KF-21 as an export product, it will continue a trend for South Korea. According to statistics from the Stockholm International Peace Research Institute, Seoul's arms exports were 210% higher from 2016 to 2020 than in the previous five years -- giving South Korea a 2.7% share of the world's global arms market.

Government spokesperson Lim Se-eun said Thursday South Korea plans to build its own surveillance and reconnaissance capabilities, electronic warfare ability, enhance its air defenses, build stronger guided weapons, and secure an independent satellite navigation system and space war capability -- all with the goal of being in the top seven nations in the global aviation industry by 2030. 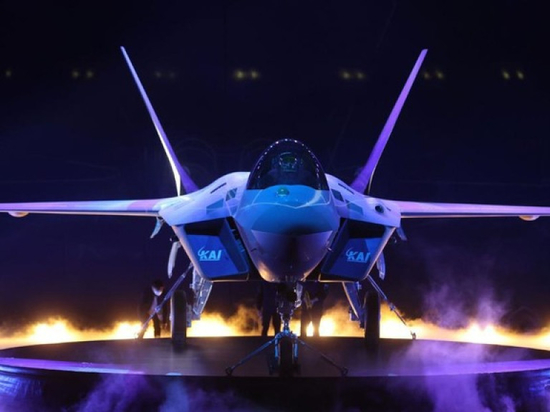 A view of South Korea's first prototype of the next-generation fighter, officially dubbed KF-21 Boramae, being revealed at the Korea Aerospace Industries Co. facility in Sacheon, South Korea on Friday. 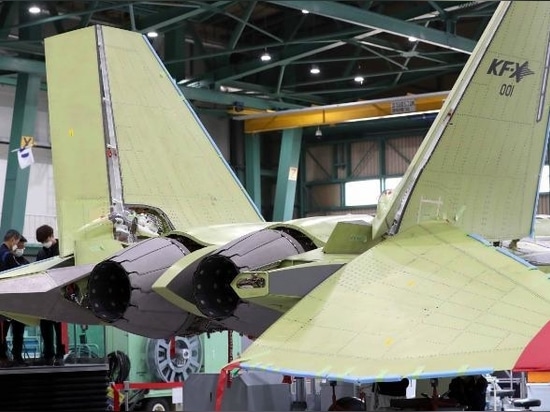 The KF-21 on the production line in South Korea earlier this year. 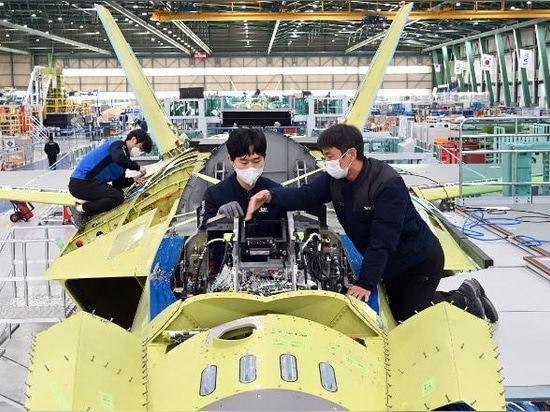 A handout photo released by KAI shows workers of Korea Aerospace Industries (KAI) assemble the first prototype of South Korea's indigenous fighter jet at its plant in the southeastern city of Sacheon, South Korea in January.