The hydrogen-powered Piper M-class six-seater turboprop being operated by ZeroAvia as a testbed for its hydrogen propulsion system was damaged during an off-airport landing on April 29, according to a May 1 press release about the accident published by the California-based startup.

According to the release, the aircraft made an "off-airport landing" near Cranfield Airport during a routine test flight, landing on its wheels before the left main gear and wing were caught in the "uneven terrain" where it landed. The two crew members onboard were not injured.

"The flight conformed to the approved test route over the airport; the structural integrity of ZeroAvia systems was maintained throughout the incident sequence and there were no unintended hydrogen or electrical releases and no fire," ZeroAvia said in the release. "After the landing, the crew were able to safeguard the battery and safely release hydrogen from the onboard tanks, following ZeroAvia safety protocol; no fluid leaks were observed at the time; and full data logs were preserved and will be used in our investigation."

ZeroAvia reported the incident to the Air Accidents Investigation Branch (AAIB), and has also tasked several of its engineers and board members with conducting an internal investigation into what caused the off-airport landing. The team will be lead by Dominic Cheater, ZeroAvia’s Head of Airworthiness, and have been selected based on their status as with the startup as being independent from the design and operation of the HyFlyer I program.

Saturday’s off-airport landing by ZeroAvia comes following several months of significant new investment flowing into the development of their zero emission powertrain. In March, the startup was awarded a new $24.3 million round of funding, lead by Horizon Ventures, which was joined by British Airways and several other clean energy investment groups.

That followed a December announcement where a $21.4 million Series A round of funding was awarded to ZeroAvia by Breakthrough Energy Ventures and Ecosystem Integrity Fund. In June 2020, ZeroAvia completed the U.K.’s first ever electric-powered flight of a commercial-scale aircraft and followed that first hydrogen-fueled commercial-grade aircraft flight using their Piper M-class six-seater turboprop in September.

The program first started flight tests out of Cranfield University’s airport in 2019 as part of Project HyFlyer, a U.K. government-industry funded program launched in an effort to demonstrate how medium range small passenger aircraft can be decarbonized. ZeroAvia’s ultimate goal, using the Piper M Class as a demonstrator aircraft, is to develop certifiable 19-passenger zero emissions aircraft by 2023.

“This incident and the ensuing investigation will undoubtedly disrupt our 6-seat HyFlyer demonstration program that was coming to an end in the following weeks. However, we do not expect any negative impact on our commercial-intent HyFlyer 2 program targeting 10-20 seat aircraft, or our large-engine development program targeting 50+ seat aircraft,” ZeroAvia said in the release. 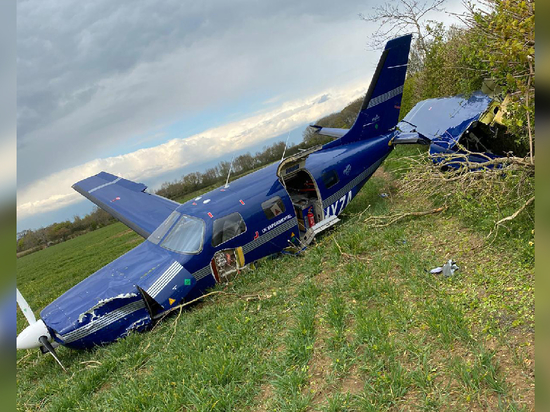 ZeroAvia's research and development aircraft for its hydrogen propulsion system made an "off-airport" landing according to the startup, the aircraft crashed just outside of Cranfield Airport.