The Global Manufacturing and Industrialisation Summit 2021 was held in Dubai this year to bring together technology experts, policymakers and industry professionals. Norbert Neumann visits a UAE-based manufacturing site and talks to the company about its products, contracts and long-term vision.

The Global Manufacturing and Industrialisation Summit (GMIS) 2021’s main focus was on how technology can boost the global economy and collaboration while putting sustainability and diversity at the forefront.

The United Arab Emirates (UAE) is the first government in the Middle East that have pledged to reach net-zero carbon emissions by 2050. Primarily relying on oil sales to sustain itself, the eighth largest oil provider in the world knows its economy needs diversification.

As part of Plan Al Ain 2030, the Urban Planning Council of Abud Dhabi undertook strategic planning to deliver the Urban Structure Framework Plan, a vision set out to help the UEA break away from oil while maintaining economic prosperity.

Composite material specialist Strata Manufacturing (Strata) in Al Ain, an inland city on the eastern border with Oman, is supporting the international aerospace industry with its composite honeycomb machining capabilities.

Strata was established in 2010 and is now producing aeroplane parts for several aerospace companies, including Airbus, Boeing, Leonardo-Finmeccanica Aerostructures Division, Pilatus, Saab and SABCA. Some of these partners have awarded single-sourced and lifetime contracts to the company. Products the company provides include the Boeing B777/787 vertical fin ribs, the Boeing B787 and the Leonardo ATR 42/72 vertical fins.

During specific manufacturing processes, the honeycomb laminate is collated with a low-density material and stiffened. The benefit of this is a sturdy but lightweight end-product, two important objectives when building aircraft. Lighter weight accounts for less emissions, or larger cargo and passenger loads with the same amount of fuel as aeroplanes made of regular material.

Using less fuel not only drives emissions down but can also make commercial flights more affordable.

To avoid material deformation in the moulding and layering process, the production line rooms’ temperature and air humidity are kept around 20.4 Celsius and 44.9%, respectively. Aeroplane parts produced by strata are going through rigorous checks with every step fed into a computer system so that engineers can easily reverse-engineer the design and assembly course if an error occurs.

Strata’s customers often participate in the inspection of parts during the first stages of production.

ALSheryani says: “Our products are better than others because we ensure the highest quality of products while meeting all deadlines. We even met all of our deadlines during the Covid-19 pandemic, whereas most of manufacturing was struggling.”

He says Strata had to implement a strenuous working-shift system to achieve this. The factory changed its regular two-shift rota to a three-shift one, with two backup teams available for each shift to ensure production will not halt even if someone was tested positive in the building.

Total production output has plummeted, however, but the company is confident it will return to pre-pandemic productivity levels by 2024.

The factory is close to three major airports and numerous seaports. The advantageous location enables the quick delivery of products to all customers worldwide.

Only 10% of factories worldwide can be considered smart, and estimates say 70% of data generated in workshops is currently unused.

Automating certain tasks can increase efficiency, reduce error rates and can save energy and time. Collaborating with Abu Dhabi-based Khalifa University, Strata developed a drilling robot that has an error rate of 0,01%.

“This machine is saving us 25 hours a week on the drilling and allows our human workers to carry out other tasks,” says ALSheryani.

Completely automation of production lines and operation of manufacturing facilities in complete darkness poses many challenges.

Chief executive officer at Strat Ismail Abdulla said at the GMIS 2021 summit: “The major challenge with dark factories is to find the right business case. You have to find opportunities where the requirement is not for a lot of low skilled labour and does not require active engineering support on-site.

“Dark factories, smart factories and traditional factories will all exist in the future. It depends on the bottom line and the business case. I don’t believe there is one solution to override the others.”

He tells Airport Industry Review: “I don’t see the lights going off across the entire factory in the near future. We think people are very important and we will make sure that if some roles are replaced by robots upskilling also takes place, so people won’t lose their jobs.”

Strata has been collaborating with UAE University under different graduate schemes since 2015. The UK-educated Abdulla believes bridging universities and manufacturing is important to ensure the pipeline of available experts that enter the industry.

“We want to empower young nationals. We develop three to four hardware and software projects with students each year that we deploy at our production lines,” he says.

The company also promotes gender diversity in its workspace and 90% of worker roles are being filled by Emirati women.

Strata is committed to working towards the UAE’s sustainability objectives and sees the answers to climate change in the development of manufacturing. The company began investing in solar panels and is dedicated to fully power its Al Ain factory with renewable energy by 2030.

ALSheryani adds: “We produce virtually no waste. Every leftover material is recycled and reused to produce new pieces.”

The latest contract strata won will include the manufacturing of the vertical fin for the new Boeing 777X. The new model will be the world’s largest twin-engine jet commercial aircraft. Because of this project, the company decided to build another facility in collaboration with technology and science company Solvay.

The new factory will open its doors by 2024 and will contribute to the 777x programme by producing the honeycomb composite material that will be shipped to the Al Ain site to produce the aeroplane parts. 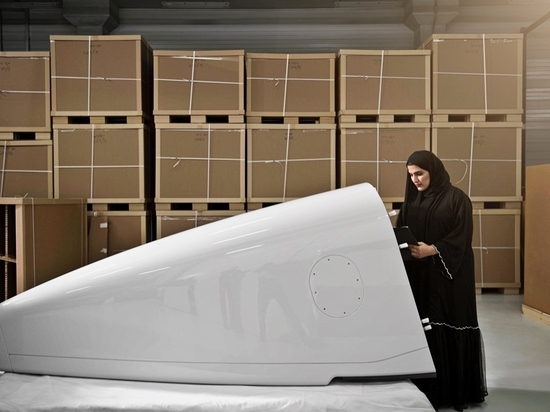