Walmart to Expand Drone Delivery to 4 Million U.S. Households in 2022

DroneUp announced this week that its delivery operations with Walmart will expand to 34 sites by the end of the year. The delivery network will include Arizona, Florida, Texas, Utah, and Virginia, in addition to Arkansas, giving access to drone delivery services to 4 million households in the U.S.

Founder and CEO of DroneUp, Tom Walker, described this as the largest rollout of drone delivery services in the United States. “It’s also going to be an opportunity to drive further user adoption by moving into new communities, and also being able to leverage the platforms that we’ll be using in those hubs to support the local communities through additional drone services,” he told Avionics International.

DroneUp and Walmart first launched drone delivery services in Arkansas in November 2021. They are currently operating out of locations in Farmington and Bentonville and have completed several hundred deliveries so far. A third location in Rogers, Arkansas, is opening in a few weeks, Walker said. Additional hubs will be located in Dallas Fort Worth, Salt Lake City, Phoenix, Tampa, Orlando, and Richmond.

“We’re excited about demonstrating both the safety and efficiency of drone delivery,” Tom Walker commented. “More importantly, it’s about giving consumers the opportunity to experience it.”

The current regulations from the Federal Aviation Administration limit operations of the drone delivery service to existing within visual line of sight, or a range of about a mile. Walker has observed significant interest from policymakers across the board to allow for operations beyond visual line of sight (BVLOS) and enable the industry to scale.

“At some point, regulators have to acknowledge that we’re operating safely—not just us, but as an industry. We’re very confident that the regulatory environment is going to enable longer-range operations,” Walker said.

John Vernon, DroneUp’s Chief Technology Officer, has been involved in recent conversations and meetings with the FAA related to enabling BVLOS. The company is optimistic that they will be able to extend the range of operations soon.

Vernon spoke to what the future holds for drone technology and for DroneUp in particular. “The technology is constantly evolving,” he remarked. “We expect things to go further faster, very quickly, which is part of the reason why we’ve adopted the approach to the market that we have. We want to stay nimble and be able to make adjustments as technology evolves.”

In the last five years, drone capabilities and those of other unmanned aircraft systems (UAS) have increased drastically. Vernon views the challenge of a quickly changing environment as an opportunity rather than an obstacle.

“There’s certainly an appetite for allowing for BVLOS and further flight operations” in multiple categories, he said. “I think being able to quantify risk is also impacted by time. Most of the data that has been produced by the industry is limited; there’s a lot of hypotheticals being put out.” Vernon shared that he looks forward to producing meaningful data as DroneUp continues to operate and scale their operations. 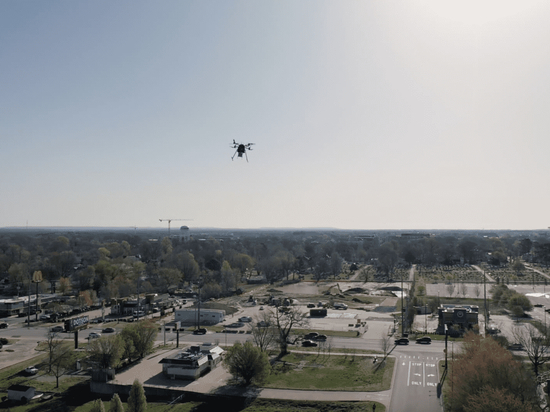 Walmart and DroneUp are expanding their drone delivery services to 34 sites in 6 states. Pictured above is a drone flying above one of the first hubs in operation, located in Bentonville, Arkansas.