Bombardier will feature the latest upgraded version of the Collins Aerospace-supplied Vision flight deck, in the Global 8000 business jet, launched this week at the 2022 European Business Aviation Conference and Exhibition (EBACE) in Geneva, Switzerland.

The Vision flight deck is the Collins Pro Line Fusion flight deck, which has been adopted by Bombardier within different configurations for various Global and Challenger models, including the recently launched Challenger 3500. Bombardier's Global 8000 brochure shows the latest configuration of the Vision flight deck includes a fly-by-wire system with four large cockpit displays and side stick controls. Enhanced and synthetic vision systems are also among the navigation features of the new Global 8000 cockpit.

During an EBACE launch ceremony introducing the Global 8000, Bombardier CEO Éric Martel highlighted the company’s Smart Link Plus health monitoring capabilities featured on the new jet. Smart Link Plus is a health monitoring unit designed to enable a more streamlined process for acquiring and sharing flight data between aircraft systems and maintenance technicians. The technology is also featured as standard line-fit equipment on Global 7500s and other new in-production Bombardier jets as well.

"We're expanding our digital services too; customers of the Global 8000 will have access to the most transformative service feature on the market today, Bombardier's Smart Link Plus connected aircraft program," Martel said. "It’s the digital evolution of services that lets our operators stay connected to the aircraft at all times, this smart technology can identify and troubleshoot problems in real time. By the time an aircraft lands, the maintenance team is already aware of the issue and can be waiting on the ground with a solution."

Global 8000 is powered by GE's Passport engines, has a top speed of Mach 0.94, and has enough seating for up to 19 passengers.

Martel also described Bombardier as having undergone tremendous change since the last EBACE convention, held in 2019 in Geneva, after two years of COVID restrictions postponed the event.

"Bombardier is a different company than we were last time we were here. We're purely focused on business jets, and we positioned our portfolio to meet the growing demand we're seeing in the industry,” Martel said. “We've built a solid backlog and significantly streamlined our balance sheet, we're investing in our portfolio, our service network is growing, and our facilities are busier than ever.” 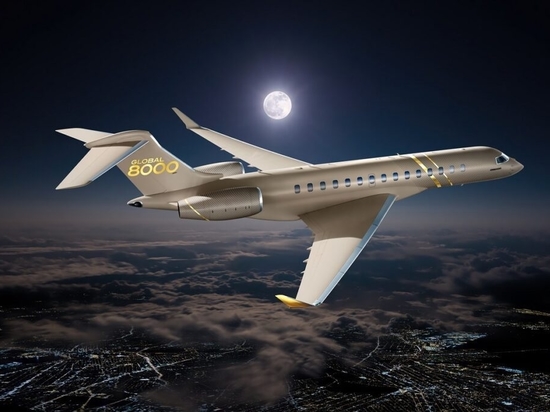 A computer-generated image of the Global 8000 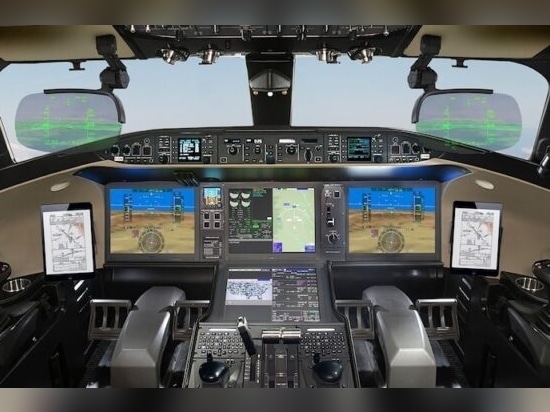 Side stick controls are one of the navigation features of the new Global 8000 business jet.