A Guide to the Airports of Greece

Europe’s holiday sun spots thrive on tourism, particularly during the summer months, and Greece is no exception.

This country is south eastern Europe consists of a large land mass and a number of smaller islands in the Aegean Sea, stretching all the way to the Turkish coast.

These islands all play their part in welcoming tourists to the resorts, beaches and stunning scenery they have to offer. Because of the overwater journeys involved, most of these islands have airports which serve as gateways for visitors.

They are also vital lifelines for linking the residents of these islands with the capital at Athens, and the rest of the world.

Aviation enthusiasts may be interested in the spotting opportunities at Greece’s airports. Here’s a guide to the best ones.

Opened in 2001 to replace the original Hellenikon Airport in the city centre, Eleftherios Venizelos International is around 12 miles east of the city, and is Greece’s busiest airport.

The airport features two long parallel runways and a single main terminal building, with a satellite building to handle extra aircraft. It is the busiest airport in Greece, and a hub for Olympic Air, Aegean Airlines and some other carriers. Most major airlines in Europe and the Middle East serve the airport, including some low-cost carriers. Some airlines from North America and the Far East also send aircraft daily.

An airport on the island of Crete. It is a civil-military site, so discretion is key and don’t use cameras or binoculars anywhere on the airport site.

Civil movements are dominated by Aegean Airlines and Ryanair, and the influx of summer tourist flights. Military movements include tanker and transport types alongside fast jets.

Kalathas Beach is some 2 miles west of the airport, but a casual spot for watching anything on approach from that direction.

Like most Greek airports, Corfu is busiest in the summer months and sees charter and leisure airlines from the rest of Europe arrive, including some from Russia. The busiest days are Friday to Monday. The airport has one runway which juts out into the bay. At the northern end is the terminal and parking apron, with a smaller apron on the opposite side used for light aircraft and firefighting aircraft.

The Kanoni Dam is a good spot to watch aircraft approaching over the sea, as is the Royal Boutique Hotel, which has a terrace.

A joint civil-military airport on Crete which gets very busy in the summer with charter flights. Because of this is also a military base spotters should be very discrete with cameras and binoculars.

The airport has one main east-west runway, with a shorter cross runway. At the eastern end is the sea, whilst to the west is the city and port of Heraklion.

There are some views inside the terminal in the café area, and from the roads either side of the terminal.

If arrivals are from the east, it is best to position yourself on Karteros Beach which is very close to the end of runway 27 and should allow you to observe aircraft without drawing attention to yourself.

A civil airport used mostly in the summer, with Aegean Airlines operating a base. It is also a military base, and the location at which plane spotters were arrested in 2001 for allegedly spying. It is therefore advisable to only spot through the terminal windows if flying out of the airport.

A moderately busy airport in the summer season, but otherwise quiet. Kefalonia has a single runway and passenger terminal. A road runs around the perimeter, which is useful as it runs the length of the runway and gives good views of movements.

One of the busier holiday airports, but still primarily a summer destination and quiet the rest of the year. Kos is a focus city for Aegean Airlines and sees most European leisure operators. Its terminal is quite small and basic but has decent views in the departure lounge.

A small airport handling summer charters and domestic services. The tiny terminal has some views. Alternately the road running between the short and the airport has various vantage points and places to park. There are also roads running past both ends of the runway.

Mykonos has a single runway and compact terminal area on the west side. The road running south from here skirts the perimeter fence and passes the end of runway 34. Otherwise it’s quite difficult to find a good place to spot here.

The third-busiest airport in Greece, Rhodes serves the island of the same name which is a busy tourist destination particularly in the summer months. Traffic is dominated by holiday flights, and is largely seasonal.

The airport hugs the north shore of the island and has a single runway (07/25) and terminal buildings on the south side.

At the end of runway 07 is a café/restaurant called Airportview. You can reach it by driving west from the terminal, through the village (Paradeisi). The restaurant is signposted, and if you go in to enjoy a snack and a seat, you’ll have views of aircraft arriving and lining up on 07 with good light for photographs.

If you’re visiting Samos on vacation, you can position yourself on the beach at the eastern end of the airport and enjoy low-flying aircraft without being bothered by anyone. Sadly, most arrivals are from the opposite direction, but you can walk along the coast road to find a better vantage spot.

A tourist airport with some domestic services. It has a single runway, with parallel taxiway that can be used as a reserve runway. The small terminal is on the western side, seeing summer operations by most European leisure and low-cost carriers, as well as some full service airlines like British Airways, Finnair, Lufthansa and Scandinavian Airlines. It is planned to upgrade the airport in the future.

Since the airport is used by the military, spotting close by is not recommended. The best location is the beach to the southeast of the airport where arriving aircraft usually pass low overhead.

This is not the busiest of Greek airports, with a small parking apron. However, many spotters love the location; it is often dubbed the ‘St Maarten of Europe’ with a road passing so close to the threshold that cars must stop and pedestrians duck when aircraft arrive.

Most movements are in the summer, with seasonal charters and low-cost flights from leisure airlines across Europe.

If landings are from the south, the Paraliakos road from Skiathos town leads past the end of the runway and you can usually see tourists and spotters congregating.

If landings are from the opposite direction, the pleasant Xanemos Beach is a great place to watch aircraft passing low overhead.

Another largely seasonal airport, serving over millions of passengers per year on tourist and regional flights. It is a base for Aegean Airlines, Olympic Air and Ryanair.

Thessaloniki has two runways – one of which extends into the sea. A second terminal will help the airport grow further and meet demands.

Spotters here should take care, and resort to discrete viewing from the terminal windows. Of note is a retired Caravelle aircraft to the west of the terminal.

Not as busy as neighbouring island of Corfu, Zakynthos is nevertheless a decent summer resort airport with flights from airlines across Europe, as well as domestic links. It has a single runway (16/34) and terminal on the eastern side.

You can discretely see aircraft parked on the apron from either side of the terminal. Roads pass either end of the runway at a short distance; you can risk parking up and/or walking along to find a vantage point depending on which direction arrivals are from, which will result in good photographs.

Kalamaki Beach to the south is a good place to relax and watch aircraft pass low overhead. There are various hotels here which have some spotting opportunities.

The original international airport serving Athens was Hellenikon, located south of the city centre, on the coast. It operated until 2001 when replaced by the modern airport.

However, much of the infrastructure is still there, with the site having been used as a venue for the Olympics in 2004.

The site is slowly being redeveloped and will disappear, however spotters may be interested in the collection of former Olympic Airways aircraft parked at the southern end, including a Boeing 727-200, 737-200 and 747-200B, plus a BAC 1-11 of Hellenic Air.

These were intended to form part of an aviation museum, but this has not materialised yet. You can see the aircraft on the corner of Pergamou and nou Karamanli streets. 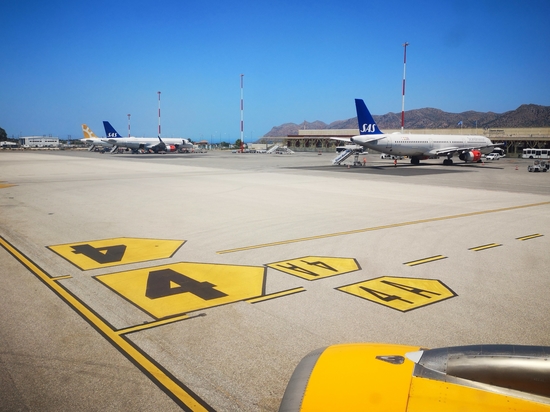 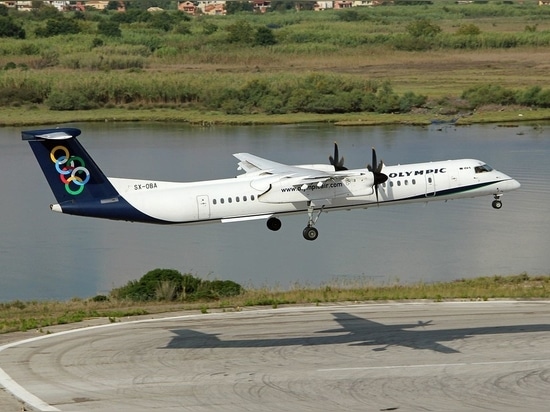 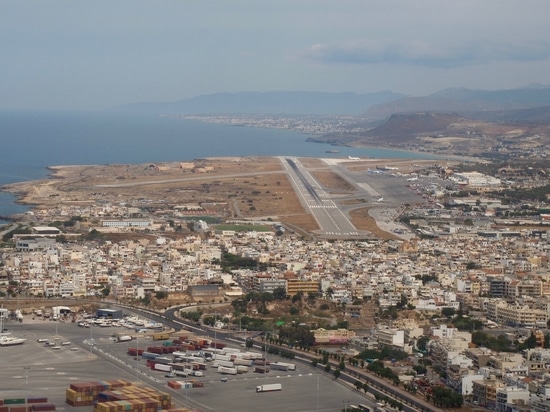 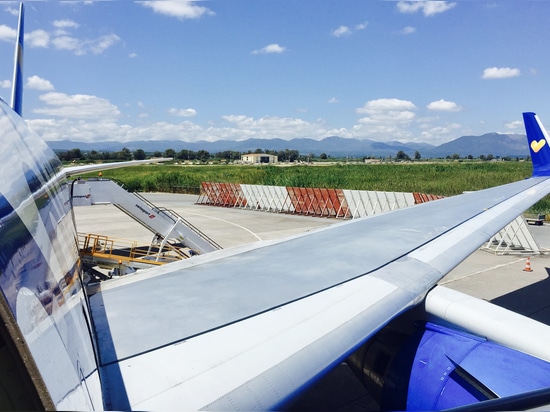 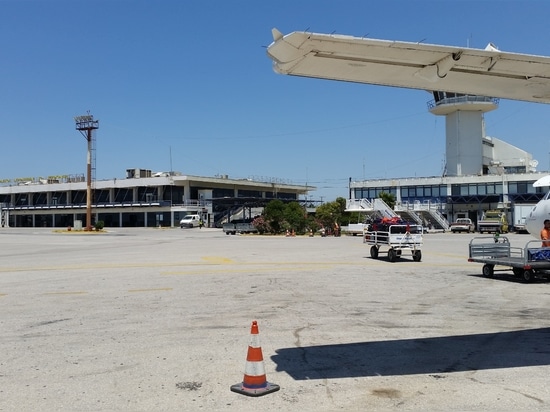