The high-flyers for everyday life

The European Union has committed itself to achieving climate neutrality by 2050. Following the passing of the Green Deal, drones and “air taxis” are gaining increasing relevance due to their small ecological footprint. They offer several advantages, particularly in terms of CO2 and noise emissions. A completely new ecosystem is shaping our airspace: Advanced Air Mobility (AAM).

Contrary to the newcomers, drones have long found their way into our everyday lives with their diverse applications. They are used for aerial photography, exploring inaccessible areas, delivering urgent medicine or rescuing wildlife. Air taxis will also soon become reality. Numerous start-ups and established manufacturers have long recognised the potential of unmanned aircraft systems and electric vertical take-off and landing aircraft and are working at full speed on their development. German companies are close to launching innovative concepts onto the market. The era of the high-flyers has begun!

Global passenger volumes have steadily increased for all means of transport in recent decades. People are demanding individualised mobility. This is reflected in the trend towards direct point-to-point connections. Electric vertical take-off and landing aircraft (eVTOLs) have this capability. Multicopters or flying machines with short take-off capability are able to relieve traffic in congested urban areas or establish direct connections between cities via air. Air taxis are technology drivers for commercial aviation. Systems for air mobility in urban and rural areas will be an important and necessary technological intermediate step between drones and commercial aviation.

The innovative aircraft systems require considerably fewer wear parts and require less maintenance than, for example, conventional helicopters with combustion engines. Air taxis require little surface area to take off and land. Vertiports stand for the transport revolution of the 21st century. They will be built both at intersections of local public transport and decentrally at local airfields. Another advantage: the investment costs are low compared to traditional mobility infrastructure.

Novel high-flyers are taking off

The first air taxi prototypes are pending approval - also in Germany. The models differ depending on the deployment scenario. The “VoloCity” air taxi of manufacturer Volocopter from Baden-Wuerttemberg is equipped with 18 purely electrically driven rotors and resembles a futuristic helicopter. After a short test phase, it will be able to fly completely autonomously. With a wingspan of eleven metres, it will accommodate two passengers and their luggage. For the 2024 Summer Olympics, RATP, the public transport provider in the Paris region, plans to connect the city's airports with the competition venues via air taxis. Munich-based company Lilium, is currently developing a seven-seater with 30 rotors. Featuring wings with folding electric motors, the air taxi resembles a mini-jet. The first commercial model, with a range of up to 250 kilometres, is scheduled for market launch in 2025. This would also facilitate shuttle services between cities.

In an initial phase, flights are to be carried out by licensed pilots. In the long term, eVTOL concept studies envisage a completely autonomous operation. After all, automation increases safety in air traffic. For example, highly integrated avionics make it possible to include additional and more complex functions in the flight control and guidance systems. Control via operators on the ground is also a possibility. They could remotely pilot several aircraft from one central location. For passengers, air travel would be conveniently bookable via smartphone, just like taxi rides - on-demand and without time delay. Business models will also emerge around this ecosystem: From the operation of the vertiports to flight-related services, the booking of tickets, slot management as well as maintenance and repairs.

In addition to targeted support for research and development activities, the industry now needs a future-oriented framework in the form of standards and regulations for this evolving mode of transport. This includes modern airspace management via the so-called U-space. In the mid-term, integration into the existing air traffic control system will be unavoidable. In the future, manned and unmanned systems will operate in parallel. Pilot projects in test cities and model regions are necessary to demonstrate the marketability of these concepts. The market forecasts are optimistic, given that the areas of application for eVTOLs are proving to be wide ranged and varied. In particular, air taxis, whether shuttle, fully autonomous or piloted, are well on their way to profoundly revolutionising air transport. Ultimately, however, it is not only the technology itself that will be decisive for their success, but also overall social acceptance.

A recent study from the consulting firm Horváth & Partners, for instance, predicts that air taxis could serve initial, fixed routes in large cities as early as 2025. The consultancy Roland Berger expects that by 2050 there will be around 160,000 commercial air taxis in the air worldwide. Thus, the market for autonomous air taxis could grow to the equivalent of 1.36 trillion euros by 2040, according to estimates by analysts at Morgan Stanley Research.

While citizens are more familiar with flying taxis from science fiction films, hobby pilots can today already easily acquire a drone. If it weighs more than 250 grams or is equipped with a camera, however, - which applies to most of these flying devices - a drone licence is mandatory.

Drones - the all-rounders of the skies

So-called UAVs (Unmanned Aerial Vehicles) prove to be compact, reliable, low-maintenance and barely audible. They fly partly autonomously and also electrically. Drones can quickly gain considerable altitude, remain in the air over long distances, and get very close to objects. At the same time, they maintain their horizontal stability - even in narrow interior spaces. Drones can explore large areas and reach places that are difficult for humans to access.

Express delivery by drone to any location is also a scenario that logistics companies have long dreamed of. Amazon says it has already invested two billion US dollars in making this dream reality. The company employs a team of around 1,000 developers in order to bring the delivery drone to market maturity. So far, however, authorities are holding back: After all, an airspace teeming with delivery drones will always harbour risks. Yet ground-controlled drones promise safe, high-quality results and save a lot of time and money compared to classic methods. There are well over 400,000 drones in Germany, 385,500 of which are used privately. According to the Association for Unmanned Aviation, the number of commercially used drones increased by 138% from 2019 to 2021 to more than 45,000.

The fields of application for unmanned aircraft systems are manifold. They are well established in agriculture and forestry, the energy and construction sectors, meteorology, surveying and geomatics and even in archaeology. Equipped with special cameras, drones create daylight images or thermal images, e.g., to identify cold bridges in buildings. They use special measuring devices to monitor outside temperature, air pressure or humidity and are equipped with sensors, lasers, infrared scanners or radar. From a bird's eye perspective, they provide maintenance services and record the need for modernisation of infrastructure.

As always in aviation, nothing stands above “safety first”. Possible collisions with drones pose a serious risk to aircraft or helicopters. In addition, drone-based technologies can be misused for criminal or even terrorist purposes. Thus, numerous companies are developing systems for drone detection and defence in order to locate and identify them at an early stage. The German Air Traffic Control is currently working on a system to locate drones in the mobile network and thus be able to pinpoint their position in the air. The safe integration of new types and sizes of aircraft in civil airspace therefore remains a major challenge that industry and authorities must tackle in tandem at the national and European level. 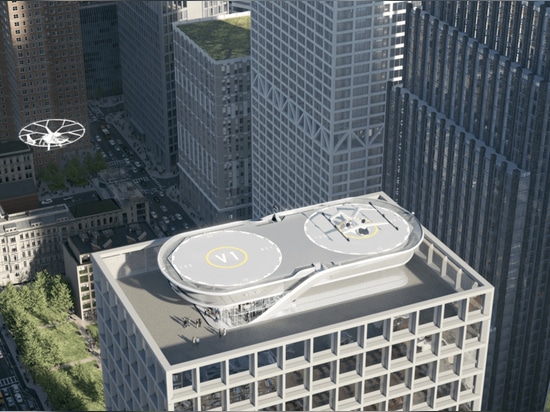