You won’t believe what the company behind the TBM has done with the Kodiak 900.

The introduction of new planes is a rare thing these days, so when Daher opened AirVenture 2022 with its announcement of a new Kodiak, it was stunning news. The new plane features a nearly four-foot stretch; four additional seats; a new, more modern and powerful 900-shp Pratt & Whitney PT-6; and cruise speeds around 30 knots faster than its predecessor, the Kodiak 100. Both planes will continue to be built in Daher’s Sand Point, Idaho, factory.

Remarkably, the plane has already earned FAA certification, says the company, which will start deliveries of the 900 next year.

The French company, which is behind the remarkable lineup of TBM speedy, pressurized single-engine turboprops, bought Kodiak a few years ago, and the marriage seemed to make sense, since Daher knows single-engine turboprops. But Monday’s revelation says that the company was thinking way ahead. The introduction of the 900—both Kodiaks are non-pressurized, rugged high-wing models—gives Daher a formidable competitor to Textron Aviation’s Cessna Grand Caravan, which is similar in many respects.

Look for a full flight report on the new Daher 900 in a future issue of Plane & Pilot. 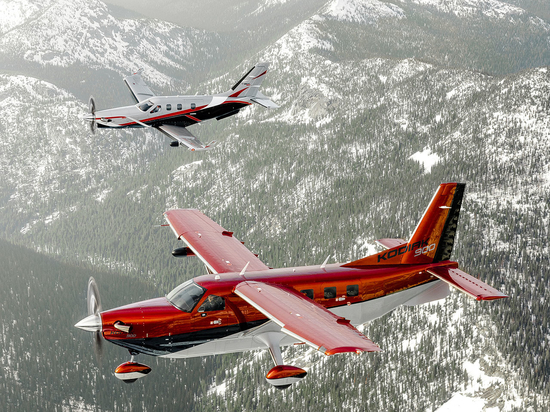 The brand new Daher Kodiak 900 with the company’s TBM 960 to its right.