The plans, first reported by The Mail on Sunday, come amid an announcement at Farnborough Airshow that a demonstrator aircraft will fly within the next five years.

The defence manufacturer wants to hire an extra 1,000 engineers in the next 12 months in its air division.

The new staff will work on the sixth generation fighter as well as the Typhoon and other future programmes.

Launched in 2018, Tempest is intended to play a crucial role in providing long-term defence and security for the UK, while delivering significant economic benefits to the nation and securing high-value skills and careers.

Engineers at BAE Systems across the North of England are leading the design, test, evaluation and build process, bringing together new digital engineering technologies such as synthetic modelling and model-based systems engineering. These design and engineering methods are helping to demonstrate how they will significantly reduce the time it takes to design, deliver and upgrade complex combat aircraft.

The demonstrator will provide evidence for the critical technologies, methods and tools, which will be used on the core platform.

Charles Woodburn, BAE Systems chief executive, said: “The demonstrator is an exciting once-in-a-generation opportunity providing experienced and young engineers alike a chance to contribute to an endeavour which really matters to our national defence and security.”

There have been a series of advances across UK industry supporting the programme, some of which were showcased at Farnborough Airshow in July.

. BAE Systems has used digital transformation to design and build a representative military fast jet fuselage, demonstrating how innovative technologies like robotics can transform the design and manufacturing capability for Tempest

. Leonardo has revealed ongoing bilateral work to support the future electronics on-board the FCAS programme. Leonardo in the UK and in Italy are working together on a number of projects with Elettronica in Italy including joint assessment of potential architecture of a common Integrated Sensing and Non-Kinetic Effects (ISANKE) and Integrated Communications System. The work is complementary to ongoing collaboration with Japan on 6th generation sensor capabilities, an area in which Italy will soon be involved.

. MBDA unveiled its concept for a weapon effects management system, to aid the coordination of all available weapons in the battle space using artificial intelligence and machine learning enhanced software.

A BAE Systems image render of the jet 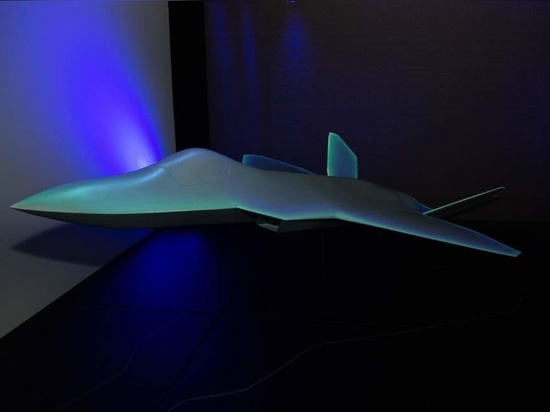 A Tempest model on show at Farnborough Airshow in July