Airbus has successfully demonstrated the potential of the A400M airlifter in an aerial firefighting role.

Flown over three days in July, the trials were undertaken over open land near the town of Guadalajara, to the northeast of Madrid. In the daylight tests the A400M demonstrated the ability to release up to 20 tonnes of water in less than 10 seconds. The aircraft’s low-speed maneuverability and low-flying characteristics allowed the final drop on July 21 to be conducted at a speed of 125 knots and an altitude of 150 ft.

The European aerospace group used its trials aircraft MSN006 for the demonstrations, fitted with numerous cameras to accurately record the drops and accompanied by a CASA C-101 chaseplane. The development of the equipment was carried out in collaboration with Spain’s MITECO (ministry for ecological transition and demographic challenge) and Grupo 43. The latter is the dedicated “apagafuegos” (fire-fighting) group of Spain's Ejército del Aire (EdA, air force), operating two squadrons of Canadair/Bombardier CL-215T/415s from Torrejón. The A400M operated from that location for the trials.

“The development of this firefighting kit is an intrinsic part of our journey towards helping to create a more sustainable and safer world, not only by our actions but also through our products,” said Mike Schoellhorn, CEO of Airbus Defence and Space. “We strongly believe the A400M can play a vital role in the fight against the ever-increasing threat posed by wildfires and support the restoration of social and environmental systems.”

To answer the firefighting requirement Airbus designed a roll-on, roll-off solution that requires no modification to the aircraft, thus permitting any A400M to undertake the role. The “RO-RO” nature of the system also means that the A400M can respond very rapidly to an emergency. A large tank is installed in the cargo hold, fitted with two independent doors that feed rectangular-section flood pipes. When the doors are opened the water is expelled over the open rear ramp through two apertures. For the demonstrations the doors were opened manually, using the aircraft’s paradropping system to provide an accurate cue to release the water.

Airbus is now studying night-time operations of the system, as well as working on getting the prototype equipment into production. The EdA itself is likely to be a customer to equip its A400Ms (locally designated T.23/TK.23), which are operated by two squadrons of Ala (wing) 31 at Zaragoza. 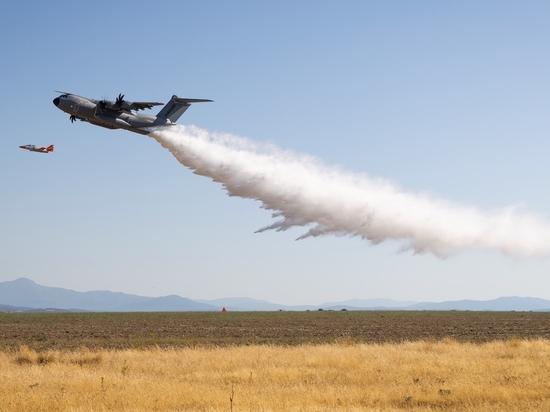 Watched from a CASA Aviojet, an Airbus trials A400M releases 20 tonnes of water from 150ft in less than 10 seconds.