Sheltair and Avfuel To Provide SAF for NBAA-BACE

Ahead of NBAA-BACE 2022 next week in Orlando, Avfuel has provided Sheltair Aviation’s FBO at Orlando Executive Airport (KORL) with two truckloads—16,000 gallons—of blended sustainable aviation fuel (SAF). Neste produced the fuel, which is a 30 percent SAF blend. It will reduce lifecycle carbon emissions by 38 tonnes—the equivalent of 88 barrels of oil.

“SAF is the best way to reduce carbon emissions," said Sheltair KORL general manager Eddie Dussault. "By partnering with Avfuel to provide this product to our customer base, we’re fueling the spirit of BACE with a concentration on and commitment to sustainable practices.”

In addition to the fuel available at KORL, Avfuel provided an extra load of SAF to Sheltair’s FBO at nearby Melbourne Orlando International Airport (KMLB), which receives and stores the fuel for use by Embraer’s U.S. headquarters. In Wichita, the fuel distributor delivered an additional load of SAF to Textron Aviation. Both airframers already have continuous-supply agreements with Avfuel and Neste and will use these further volumes to power their aircraft flying in for the show’s static display.

“The Avfuel team is proud to have the capability to provide four extra loads of SAF surrounding NBAA-BACE,” said Keith Sawyer, the Michigan-based company’s manager of alternative fuels. “Of course, this wouldn’t be possible without Sheltair’s coordination to help customers fly sustainably, Neste’s dedication to SAF production, and the OEM’s commitment to reduce emissions.”

With the presence of SAF in Orlando for BACE, inbound operators can now take advantage of both means of furthering the use of the renewable fuel. Atlantic Aviation earlier announced that it would be sponsoring SAF book and claim at its two Orlando FBOs during the show in partnership with 4Air. 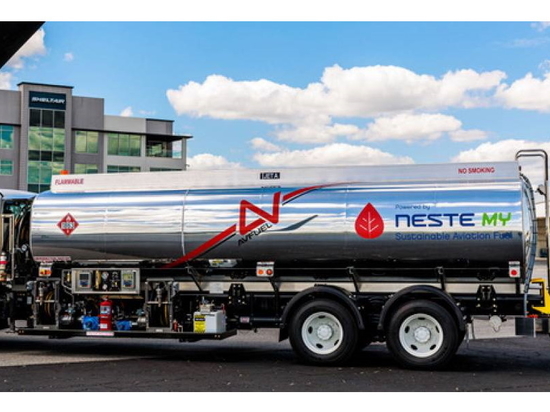 Sheltair has received two tanker loads of blended SAF at its Orlando Executive Airport FBO in time for NBAA-BACE next week. (Photo: Avfuel)