JetBlue Airways’ sustainability efforts have taken many forms, and its investments in early-stage companies through its JetBlue Ventures division reflect its willingness to commit financial resources to a wide range of eco-conscious enterprises. Recently adding its 41st company to its portfolio of investments, JetBlue’s venture capital arm doesn’t limit its financial interest to technology companies.

But a commitment to sustainability remains at its core, as evidenced by its stakes in companies such as eVTOL developer Joby, Universal Hydrogen, and, most recently, battery pack developer Electric Power Systems.

During last month’s JetBlue Ventures Sustainability Summit in San Francisco, the division’s president, Amy Burr, explained to AIN that the impetus for the investments of course stem from a desire to advance JetBlue’s sustainability goals, which include reaching net-zero carbon emissions by 2040. But she also noted that the breadth of its portfolio reflects an interest in playing a role in the industry’s broader efforts to meet a 2050 net-zero target.

“A lot of why we've invested in folks like Universal Hydrogen and others in the sustainability space across different propulsion systems is because we think that all of them will play a role for different types of airlines, different types of aircraft,” said Burr. “Robin Hayes, our CEO, very much believes that we're in this together as an industry. He's the chair of the IATA [board of governors] right now, and so he’s thinking about this [as a collaborative effort].

“Different solutions might be relevant to different types of airlines,” she explained. “Hydrogen might be really relevant for us. We do operate single-aisle aircraft… but it might not work for somebody who's flying, for example, a triple seven [Boeing 777]. Or, for our regional partners flying smaller jets, a lot of the electrification will go there first. But it all helps, in general, the entire traveler community that JetBlue is part of.”

While Burr wouldn’t reveal the total level of investment JetBlue Ventures has committed, she and her team concentrate financial resources on what she characterized as bigger problems to solve rather than “niche” efforts. In deciding whether to commit investment to a particular company, JetBlue Ventures first looks for a unique and creative approach to whatever challenge it endeavors to overcome. Next, she said, she looks for a strong, credible leadership team that exhibits a capacity for innovation.

“[We ask ourselves], do we trust them?” explained Burr. “Do we think that they're credible and have the right mindset to actually build a company out of this? There are a ton of smaller startups in our industry that are [concentrating on] very niche kind problems…but we're going to want to put our money against a bigger problem solver.”

Calling JetBlue Ventures ideally positioned to help inform JetBlue’s product and operations teams of emerging and future advancements, JetBlue Airways established the venture capital arm in 2016 as a so-called innovation outpost in Silicon Valley to “reshape entire industries,” and “see beyond the horizon” by capitalizing on innovations before others do. As such, JetBlue sees itself as a pacesetter in the industry’s sustainability efforts, becoming one of the first airlines to tie executive compensation to environmental, social, and governance (ESG) metrics.

Examples of JetBlue’s specific, measurable, and what it considers aggressive decarbonization targets include aims to decrease aircraft emissions by 25 percent per available seat mile (ASM) by 2030 from 2015 levels, excluding offsets, and achieve net zero carbon emissions by 2040, including offsets. The airline also expects to increase its use of sustainable aviation fuel (SAF) to 10 percent of its jet fuel consumption by 2030. Other initiatives include converting 40 percent of three main ground service equipment vehicle types to electric by 2025 and 50 percent by 2030; eliminating single-use plastics “where applicable” and, if not, ensuring the plastic it uses is recyclable; and maintaining at least an 80 percent recycling rate for audited domestic flights.

JetBlue conducts what it calls rigorous, multi-month, cross-department analyses before setting sustainability goals and initiatives, which senior leaders and the board review before finalizing. For example, it considered forecasts of future SAF supply, policy frameworks, costs, and network planning factors when setting its goal of reaching 10 percent SAF use by 2030, while considering SAF availability, forecasts for fleet and network efficiencies, and the potential for new aircraft technology when setting its 2040 net-zero target.

One of JetBlue’s most visible efforts to help meet the 2040 target resides on airport tarmacs, where it plans to conver­t 40 percent of three main ground service equipment vehicle types to electric by 2025 and 50 percent by 2030. The airline has used electric ground service equipment in place of diesel bag tugs and belt loaders at its Los Angeles area airports for years and recently completed the conversion of 118 GSE units to electric at New York JFK Airport. It also has begun the process of introducing electric GSE to other major airports including Boston Logan and Newark International Airport.

“We’re incredibly proud of the ongoing momentum we have helped create in driving the industry forward,” said JetBlue head of sustainability and environmental, social, and corporate governance (ESG) Sara Bogdan. “The challenges of the last several years would have made it easy for us to abandon our sustainability goals, but, in fact, we’ve only strengthened our commitments. While most will think of the negative impact Covid-19 had on travel, for JetBlue, it helped us see first-hand the vulnerability of our business to external risks, and we actually sharpened our focus on all things sustainability and ESG.” 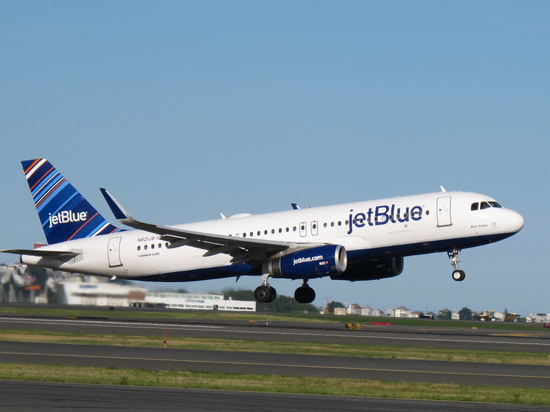 JetBlue Airways expects SAF to account for 10 percent of the fuel it uses for its fleet of airplanes, including its Airbus A320s, by 2030. (Photo: JetBlue)