Universal Hydrogen plans to fly the first-ever hydrogen-powered regional airliner by the end of this year using a hydrogen-fuel-cell-based powertrain housed completely in one of the nacelles of a De Havilland Dash 8-300 turboprop. Now in the late stages of testing the powertrain architecture in an iron bird test rig at its facility in Hawthorne, California, Universal Hydrogen has partnered with Aerotec to perform the engine integration and fly the aircraft out of Moses Lake, Washington.

Universal Hydrogen chief commercial officer Rod Williams told AIN that the company developed its own flight control software for the iron bird testing and will install the same powertrain architecture in the Dash 8. He called the decision to house the entire 1-megawatt powertrain, including the fuel cell, in the nacelle “critical” for the airplane’s commercial viability.

Williams explained that the company chose that path for the test aircraft because putting the fuel cell in the fuselage would have compromised seat count and failed to produce “real learning” about how to meet its goal of containing the powertrain in a nacelle.

“We’re not doing this the easy way,” he quipped. “So we took the engine out of the aircraft some time ago; we’ve received all of the parts from the suppliers, and now we are literally just rebuilding the powertrain in the empty engine nacelle.” Major suppliers include MagniX, which provides the electric motors for the powertrain, and Plug Power, which supplies the hydrogen fuel cells.

Universal Hydrogen has also begun work on an ATR 72 in Toulouse, France, where, Williams said, the company plans to integrate virtually the same powertrain design into the Franco-Italian turboprop, giving it the same roughly 500 nm range the modified Dash 8 will feature. Universal uses the ATR to perform engineering development and test what the company calls its "modular logistics technology."

The company’s modular capsules store hydrogen during transit and serve as fuel tanks that load directly onto the aircraft. The modular fueling concept avoids the need for expensive and time-consuming development of hydrogen fueling infrastructure at airports, allowing for the transport and handling of hydrogen using the existing intermodal freight network and cargo handling equipment.

“By turning hydrogen into cargo, we are creating a capital-light hydrogen distribution infrastructure based on the existing global, intermodal, containerized freight network,” said Williams. “The modules are loaded onto the aircraft, they're latched down, and then they basically serve as the fuel tank within the aircraft to supply the fuel to the powertrain…So when you land at your destination, you take the modules off and you ship them back to the production site, and you refill them with hydrogen, and then you deliver it back to the same or a different airport to basically refuel the next aircraft.”

Development and testing schedules call for receipt of supplemental type certification first for the ATR, in 2025, said Williams, who explained that market demand drove the decision to pursue certification for that model ahead of the Dash 8. In June Universal Hydrogen said it drew a firm order from prospective Massachusetts-based regional carrier Connect Airlines to covert 75 ATR 72-600 regional turboprops to hydrogen power. Connect Airlines plans to start operations with De Havilland Dash 8-400s from points between the Northeast and Midwest U.S. cities and Toronto’s Billy Bishop Airport.

Although Connect Airways will need to acquire the ATRs for conversion, Williams stressed that Universal will work with the airline to help source the airplanes.

Meanwhile, Universal Hydrogen continues preparations for a new manufacturing and distribution center for its hydrogen propulsion systems in Albuquerque, New Mexico. In March the company signed an agreement with New Mexico’s governor, Michelle Lujan Grisham, to develop the facility on a 50-acre greenfield site at the city’s main airport. Universal said it will invest $254 million in the facility, where it plans to start production in 2024 and hire 500 employees over the next seven years. Universal now employs about 100 people. 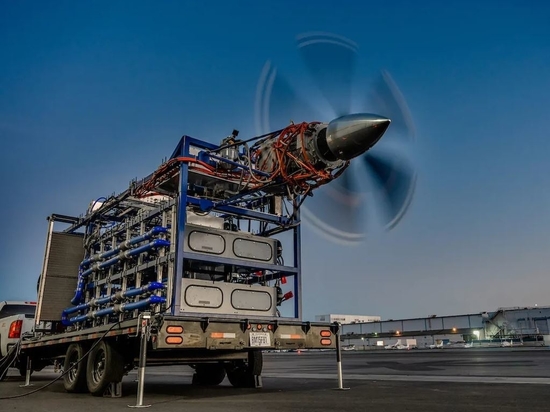