Erickson has delivered its eighth S-64 Air Crane helicopter to the Korea Forest Service (KFS) since 2001. KFS was the first foreign government entity to purchase an S-64. The latest aircraft was delivered on December 3rd after beginning production at Erickson’s Oregon facilities in 2020.

The helicopter will be equipped with firefighting equipment including a 2,650-gallon water/fire-retardant tank with a quick-fill snorkel and is kitted for night-time operations. With a nearby water source, a single Air Crane can drop up to 25,000 gallons an hour on a fire.

The Portland, Oregon company manufactures and performs MRO services for the S-64 as the OEM after acquiring the type certificate from Sikorsky in 1992. In addition to manufacturing the aircraft for third-party customers, Erickson also maintains its own fleet for missions including firefighting, powerline construction, timber harvesting, HVAC installation and removal, and specialized heavy-lift for oil and gas.

The helicopter is powered by a pair of Pratt & Whitney JFTD12-5A engines, has a main rotor diameter of 72 feet, and a 16-foot-diameter tail rotor. Deployed Air Cranes typically travel with a six-man crew—two pilots, two mechanics, and two drivers—a maintenance trailer, and a fuel tanker truck. 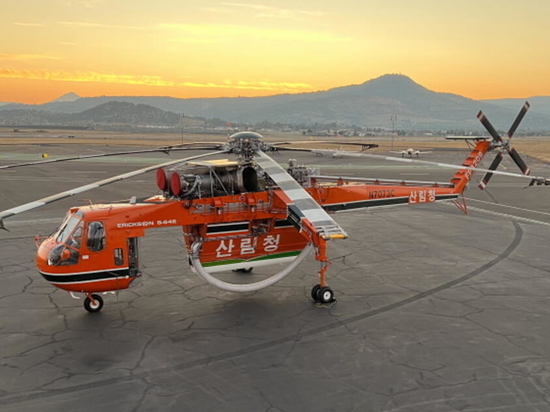 Erickson delivered the eighth S-64 Air Crane to the Korean Forest Service on December 3rd. The helicopter will be used for firefighting missions. (Photo: Erickson)